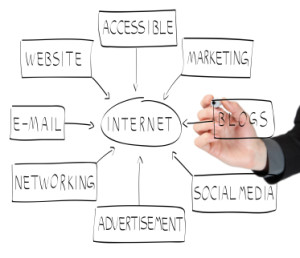 Chris Warden, CEO of Spread Effect, took a look at some of the biggest marketing

changes that occurred in 2012. Of course, Google, social media, and local searches appeared in his list of the biggest changes for 2012. Here's a top ten list of some of the most profound ways in which 2012 permanently changed marketing standards for businesses and brands.

The biggest change that occurred in the marketing world in 2012 was, by far, the shift toward content marketing as the single-most effective way to generate renewed interest in a brand. Successful companies today are the ones that publish content in a variety of different formats and through various platforms. Twitter content, Facebook content, website content, blog content, and even the publication of eBooks, online guides, and email campaigns are all being combined into one massive marketing strategy. Unless a business is able and willing to produce mountains of content throughout the next year, other brands will fill the content void and command consumer attention.

The Consumer's Voice is Heard

Another important change in marketing that occurred throughout 2012 was the power given to the voice of the consumer. In the past, a consumer who was dissatisfied with a brand's products or services could expect to have a very minimal effect on that brand's overall success. Conversely, consumers who love a brand and its products or services were limited to word-of-mouth sharing with friends, associates, and family members. It was highly unlikely that a consumer would be able to reach other consumers on a large scale. That is no longer the case. Today, one of the most dramatic marketing effects for brands has nothing to do with paid advertisements or entertaining television commercials. A viral review by a consumer via social media can be all a business needs to double profits in a week. The voice of the consumer can be heard worldwide, and consumers are using this new power to share their favorite brands with the world.

Brands Must Be Accountable

Because of the new power of the consumer voice, another marketing trend occurred in 2012: brand accountability. Brands today cannot throw consumer complaints under the rug and simply hope that no one notices. Brands must be accountable to their customers and for their products and services. Brand accountability is one of the most powerful marketing effects that occurred in 2012.

Advertising is Intimate, not General

Another hugely significant way that marketing changed in 2012 was the shift from generic advertisements to personal and intimate advertising campaigns. Niche marketing, the process of dividing a target audience into smaller and smaller subgroups has become one of the most effective ways to sell products and services. Consumers want to know precisely which products or services are beneficial to their specific needs. Advertisements that address specific age groups, genders, occupations, and regions are more successful than blanketing generic advertisements.

One important marketing change that occurred in 2012 is still causing business owners to scratch their heads in puzzlement. In the past, brand competition was typically limited to similar businesses in the same location. This is no longer the case. Because of the importance of search engine optimization, you may find that your company is competing with a completely different industry on the other side of the globe. If you use similar phrases or ideas in your advertising, you might be competing with businesses you never would have expected. The competition field has altered dramatically in 2012.

The Effects of Marketing are Measurable

A beneficial change that occurred in 2012 is the measuring of marketing efforts offered through online marketing. Instead of guessing at the effectiveness of a gigantic billboard or an expensive television commercial, businesses are able to use metrics and software to specifically analyze the effectiveness of an online marketing campaign. Businesses now know precisely where their money is best spent.

Increased accessibility through worldwide Internet access, mobile smart phones, and miniature tablet computers made a huge marketing difference in 2012. Businesses and brands were able to contact their consumer audience 24 hours a day, 7 days a week. The opportunities are endless because of improved accessibility.

2012 saw the attractiveness of big, corporate business begin to wane. Because of the shift to online marketing and content marketing, the smaller businesses began to gain ground in the marketing race. Smaller businesses were able to adjust more quickly to marketing changes and trends than their sluggish, big-business competitors, and this nimbleness was hugely beneficial in 2012.

Blogs, Twitter accounts, Facebook posts, YouTube videos, and other social marketing efforts emphasize conversation between a brand and its consumers rather than advertisements about products or services. The sale is now considered secondary to communication. 2012 saw a huge shift in marketing strategies, and today a huge portion of the "marketing" being done by a business doesn't involve a team of marketers designing the text and layout of an advertisement. Instead, marketing efforts are being performed by employee blogs, CEO tweets, and even the consumers themselves. The era of learning how to make money and profit is shifting, and fast.

One of the final marketing changes of 2012 that promises to continue adapting throughout the next several years is the issue of consumer privacy. As social media and networking make consumer information more accessible, new laws regarding privacy will affect the ways in which businesses and brands can access and use that information. This may be the one change in 2012 marketing that hasn't finished changing.

My name is David Anderson, owner of David Anderson Wealth. I am business professional with over 30 years of experience in small, medium and large (corporate) business. My goal is to teach anyone who wants to learn, how to make money online, improve a current business or develop a strong start up business online, from home or brick and mortar.

8 Ways to Raise Money for a New Business

10 Ways to Win Over Loyal Fans of Your Brand

How to Find Influencers for your Niche in Social Media

How Niche Marketing Segments are Winning the Battle

Why Customer Relationships are Always Key

Why Being the Industry Expert is Crucial for Business

Why the Eco-Friendly Product Movement is Powerful and Lasting

How to Build a Lasting Niche Business Community

10 Ways to Optimize Leads for Your Online Business

Google Authorship and How it Impacts Authority

Content Curation: How to Change Customers into Brand Advocates